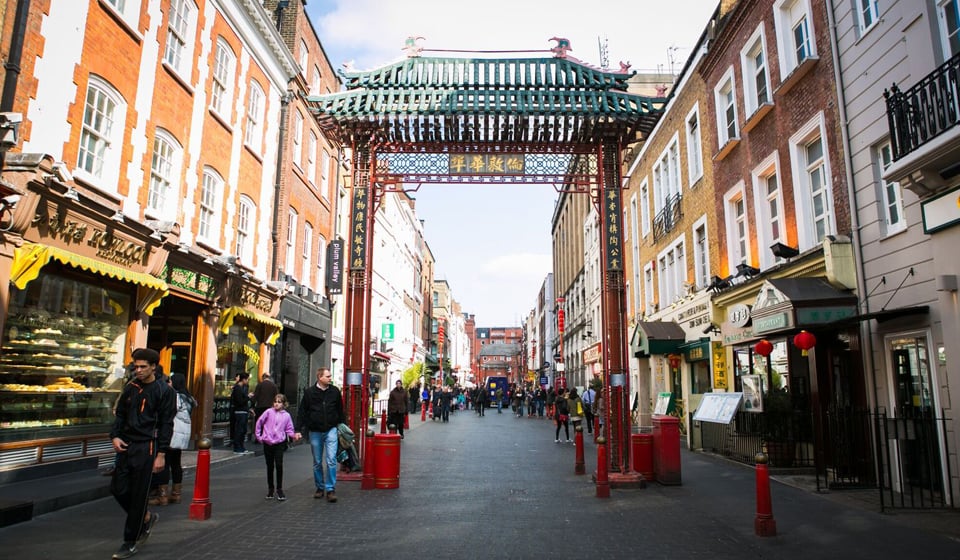 Within a century it was one of London’s hotspots - a haunt for artists, authors and politicos who put the world to rights at the Turk’s Head Inn over many-a boozy tipple.

Chinatown’s colourful history stretches back long before the Chinese community of restaurants and businesses popped up in the 1950s. It was the birthplace of the Post Office, Ronnie Scott’s and the playground of the literary elite.

In fact, London’s original Chinatown was in the East End where Chinese employees first rocked up in the 18th century, settling in Limehouse. By 1914 a Chinese community was burgeoning with new restaurants and shops catering for sailors.

Today’s Chinatown’s story begins with the Great Fire of London. In the panic to rebuild, attention turned to a military training ground on farmland. The area’s owner, Lord Gerrard gave permission for houses to be built. Gerrard Street was completed in 1685, then later a market hall and slaughterhouse. Voila, Soho was born.

Within a century it was one of London’s hotspots – a haunt for artists, authors and politicos who put the world to rights at the Turk’s Head Inn over many-a boozy tipple. Not just popular with London’s intelligentsia, the area was a magnet for immigrant communities like the French Huguenots.

In the late 1800s new waves of immigrants followed; Italians, then Jewish, then Maltese. Irish proprietor Kate Meyrick ran the notorious roaring twenties 43 Club at 43 Gerrard Street and legendary jazz maverick Ronnie Scott set up his first jazz club in the basement of number 39. Soho was well and truly on fire – culturally this time…

Post-war London’s Chinese community were short of income and even shorter of a place to live. When they arrived to the area in the 1950s, it’d gained a reputation for great nightlife and cheap commercial rents. Luckily for them, British soldiers returning from the Far East had fallen hard for Chinese cuisine and so up sprung supermarkets and restaurants. Their success attracted more Chinese entrepreneurs away from the East End to seek their fortunes, and the Chinatown of today was born.

By the late 1960s, Chinatown was truly established as the epicentre of London’s Chinese community – now numbering in the tens of thousands as more and more Chinese workers arrived from the British territory of Hong Kong. By now a Far Eastern travel agency set up shop to cater for the ever-arriving number of restaurant workers.

In the 1980s the area got the full Chinatown treatment; Chinese gates, street furniture and a pavilion were added, plus Gerrard Street, parts of Newport Place and Macclesfield Street became pedestrianised.

From bakeries to bars and restaurants to reflexology, today Chinatown is a thriving hub of Oriental wonder. Souvenir shops, health clinics, barbers, travel agents – it really does have everything. Lord Gerrard would be proud.

17th Century The first buildings appear on the site of present-day Chinatown in the aftermath of the Great Fire of London. Lord Gerrard, the area’s owner gives permission for developer Nicholas Barbon to build houses on what is now Gerrard Street.

18th Century The first Chinese sailors appear in London as employees of the East India Company.

1840s Britain takes over Hong Kong, paving the way for a growing number of Chinese people to arrive in London.

1880s London’s first Chinatown becomes firmly rooted in the East End as growing numbers of Chinese sailors and traders settle and open businesses in the Limehouse area. Chinese shops and cafes begin to spring up.

1914 At least 30 Chinese businesses, including several laundries, are operating in Limehouse.

1939-45 The aerial bombing of London’s East End causes so much damage to the Limehouse community that it begins to move west to present-day Chinatown in Soho.

1945-50 British soldiers returning from the Far East bring with them a new taste for Chinese food; restaurants begin to spring up in the new Chinatown as the community capitalises on this new clientele. By 1950, there are around 2000 Chinese in Britain, including many veterans of the wartime Merchant Navy. Many are working in Chinatown’s new restaurants.

1960s Growing numbers of Chinese arrive from Hong Kong to work in the now-booming restaurant trade. Chinatown’s community grows further as the wives and children of these workers move to London to join their husbands.

Early 1970s Community life develops further with the introduction of schools to teach Chinatown’s children their mother tongue and maintain links to their homeland. Local clubs and cinemas are rented to show Chinese films to packed audiences.

1978 The London Chinese Chinatown Association is formed to promote stronger links between Chinatown’s community and the City Council, Police and the community outside of Soho.

1979 The Chinese Community Centre is opened and becomes a popular venue for gatherings and social events.

Mid-1980s In recognition of Chinatown’s significance, Westminster City Council collaborates with the Chinese community on a series of initiatives to improve the area, including the restoration of Lisle Street’s 18th century shop fronts

25th July 2016 A new Chinatown gate on Wardour Street was opened by the Duke of York, Prince Andrew on 25th July 2016. Made by Chinese artisans and assembled in London, the gate is in the style of the Qing Dynasty.

Present day Chinatown now encompasses Gerrard St, the bottom half of Wardour St, Rupert St and Rupert Court, a section of Shaftesbury Avenue, Lisle St, Macclesfield Street and Newport Place, Newport Court and Little Newport Street. The community holds several festivals throughout the year and boasts near 100 restaurants with cuisine from across East Asia, dozens of shops including herbal remedy treatments, hairdressers, pharmacists, reflexology specialists and travel agencies, and some most acclaimed bars and pubs.