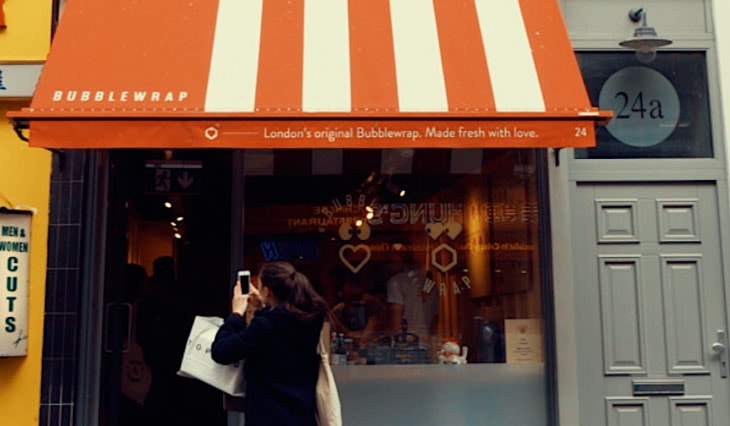 The woman behind those Willy-Wonka-esque waffles

Who’d have thought a humble Hong Kong street snack from the 1950s could cause such a frenzy in Chinatown London? When Sunny Wu and her partner, Tony Fang, opened Bubblewrap in 2017, their ultra Instragrammable egg waffle cones quickly became one of the hottest desserts in town. In this month’s episode of Faces of Chinatown, we caught up with Sunny Wu as she shares her philosophy behind their waffle-y good treats.

“I think everyone has a childhood snack that rings a bell in your mind when you see it or smell it, one that evokes a lot of good memories,” explains Sunny. “What we wanted to do is re-brand bubble waffles and rebuild them so that people around the world know about them and can enjoy them themselves.”

What makes Bubblewrap’s waffle cones so irresistible? The way Sunny and Tony have given them a 21st century remix: fun ‘n’ funky flavours, like their May Day special beetroot base and Persian gelato, or their savoury salt and pepper egg and avocado. But they also have their go-to vanilla, dark chocolate, hazelnut, or strawberry cheesecake gelatos (to name a few), all served with a choice of toppings like Oreos, matcha ice cream, fruit, and nuts. Sunny is keen to strike a balance between tradition and modernity, “We want authenticity as a foundation in Chinatown, but we’ve played around with new elements. With our Bubblewraps, we don’t just want something that looks fancy, we want to keep that traditional side but with trendy or new elements to it.”

What does being in such an iconic location as Chinatown mean to her? “Chinatown has given us a really good opportunity, and it’s a community here which is more special than just opening a shop. Chinatown has always been a destination to come for a few drinks and have food, now I think people regard it as a destination to hang around. Society evolves and Chinatown evolves!”

If you’ve not yet tasted a Bubblewrap waffle cone for yourself, get down to their Chinatown store to taste Hong Kong’s bubbliest street food for yourself. How we ever survived before Bubblewrap, we’ll never know.