Chinatown London certainly conjures up images of food, having gained a reputation as one of London’s top foodie destinations. However, this vibrant district also boasts some of London’s best cocktail bars. Often hidden in plain sight, the signature cocktails are well worth sampling and the transportive atmospheres and themed decors are a world away from the bustling streets. Whether you’re looking to book venues for a private party or are seeking a quiet place to sip your favourite tipple into the early hours, here’s our guide to some of Chinatown London’s best cocktail bars. 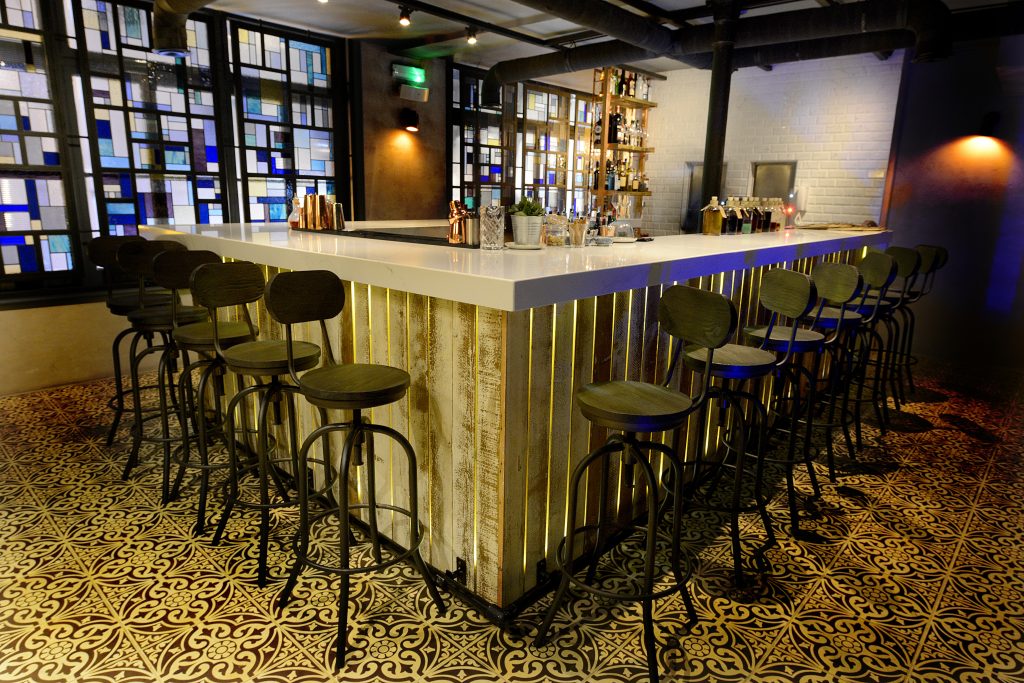 Vietnamese street food has always been up there as an all-time favourite of ex-Hakkasan, Michelin-starred chef and Founder of Viet Food, Jeff Tan. Venture to the uppermost level of the three-storey building and you’ll find the beautifully art-deco Viet Lounge. The bar is run by mixologist Alex Loy (formerly Head Barman at The Dorchester, Park Chinois and Hakkasan) who’s known for his homemade syrups which form the base of many of the signature cocktails on offer. Sichuan peppercorn syrup is a key component in the Coa Cao cocktail, which blends Maraschino liqueur, gin, lemon, and egg white with whole Sichuan pepper for a with a kick. Also look out for homemade yuzu, butterfly pea flower syrup, and many more. 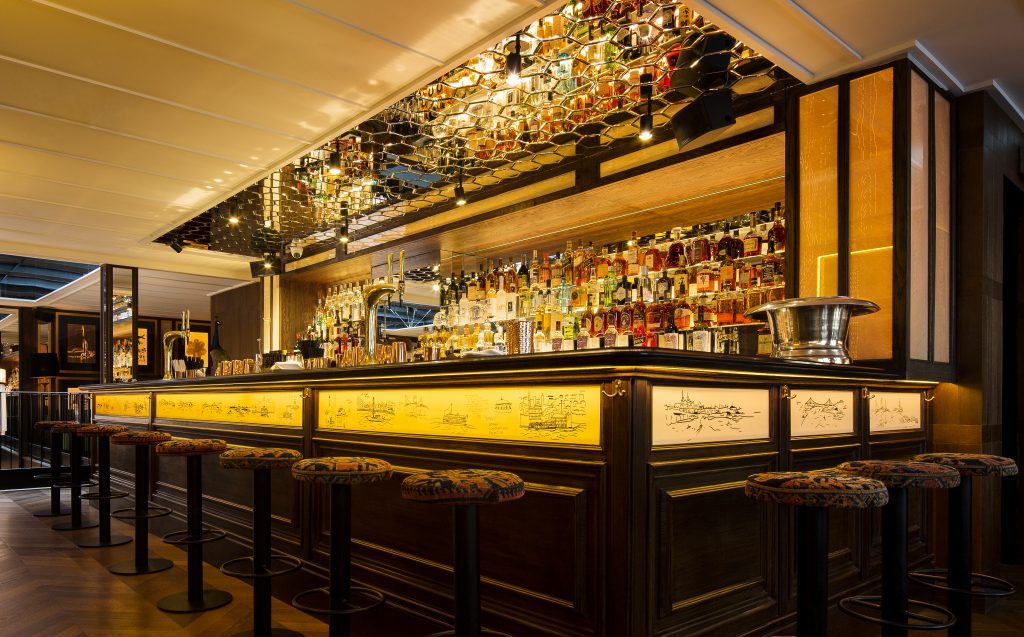 Hovarda brings a culinary wave of the Aegean Sea to Chinatown. The sleek seafood eatery serves the freshest of morsels inspired by Greek-Turkish flavours, all whipped-up with ultra-elegant execution.

After dark at weekends is when the magic really happens at Hovarda, as DJs take to the decks and spin some tunes from 10pm ‘til the wee early hours. Grab yourself their signature Hovarda cocktail (an indulgent infusion of Yeni Raki, cinnamon, yoghurt, Turkish honey and espresso) and strut your stuff at their stylish bar.

Make sure to visit the website for details on festive parties and menus right through the Christmas and New Year period.

The Mulwray (at The Blue Posts) 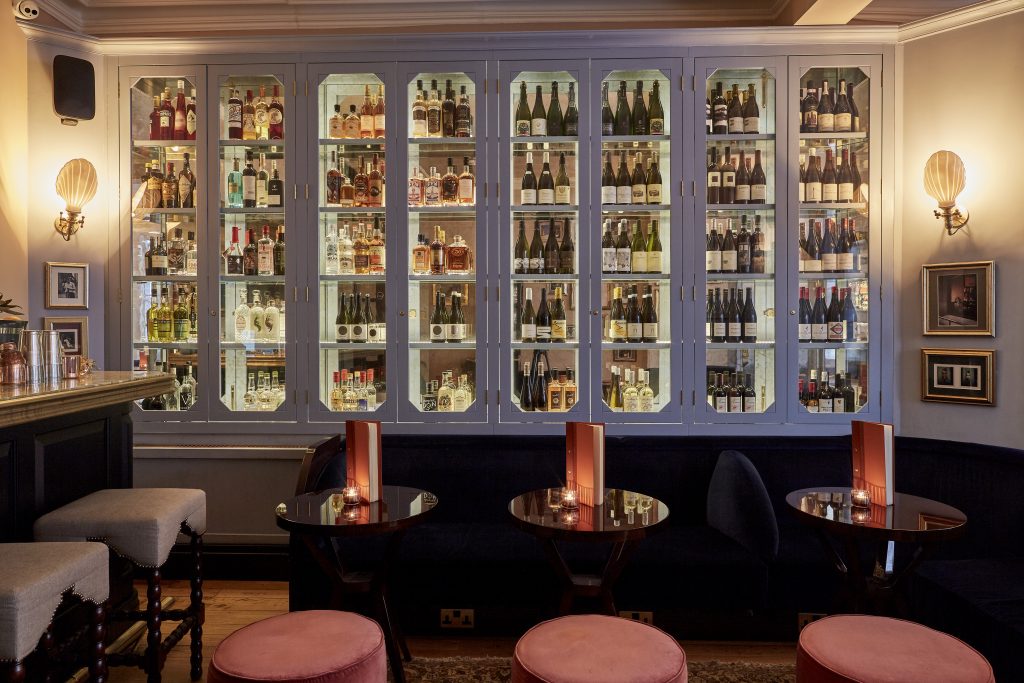 From the team behind ultra-hip Israeli eatery The Palomar, The Blue Posts is a three-floor drinking den nirvana. On the ground floor of the lovingly restored Rupert Street townhouse you’ll find its swish and sophisticated namesake pub. All slate-grey walls and high-ceilings with a sleek burnished-metal bar, The Blue Posts is a must-visit for craft-beer fiends thanks to independent IPAs and local brews-aplenty on tap. A small but perfectly formed wine list features classics and curveballs alike.

For the more discerning of sipper wanting a cocktail or two, head upstairs to The Mulwray. Taking its name from Fay Dunaway’s Chinatown character, the cosy lounge is an elegant retreat from the hustle and bustle outside. There are playful concoctions from the mezcal-led White Mischief to the pineapple rum infused Magic Hour.

Their festive cocktails include the Midwinter Mulwray, Snowgroni and Santa’s Martini. 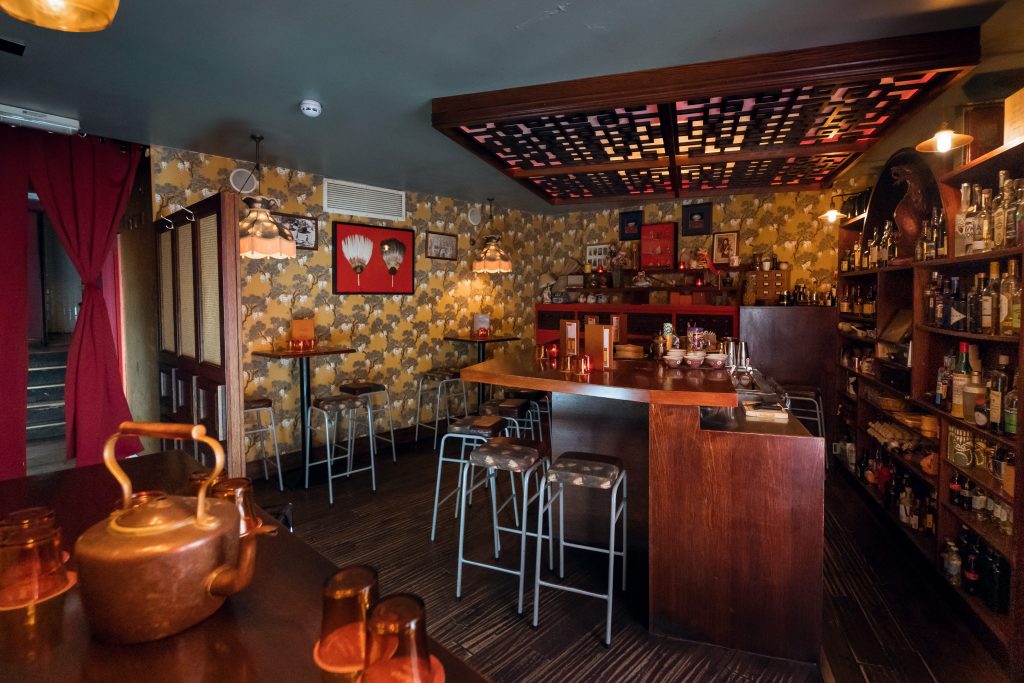 Find dim sum, tea and cocktails all under one roof at Opium – an exotic, secluded little bar, tucked away from the Chinatown bustle. With three different bars set over two floors, it’s an escapist’s paradise. Doused in themes from a bygone era, it juxtaposes 1920s Hong Kong and modern hipster, while dropping 1970s beats from American-Kung-Fu-inspired funk.

Cocktails created with tea, spice, smoke and theatrical flair are the norm at Opium. Spirits are ‘dispensed’ in Chinese medicine bottles, and the peckish can dine on their inspired East-meets-West dim sum menu, available until late. 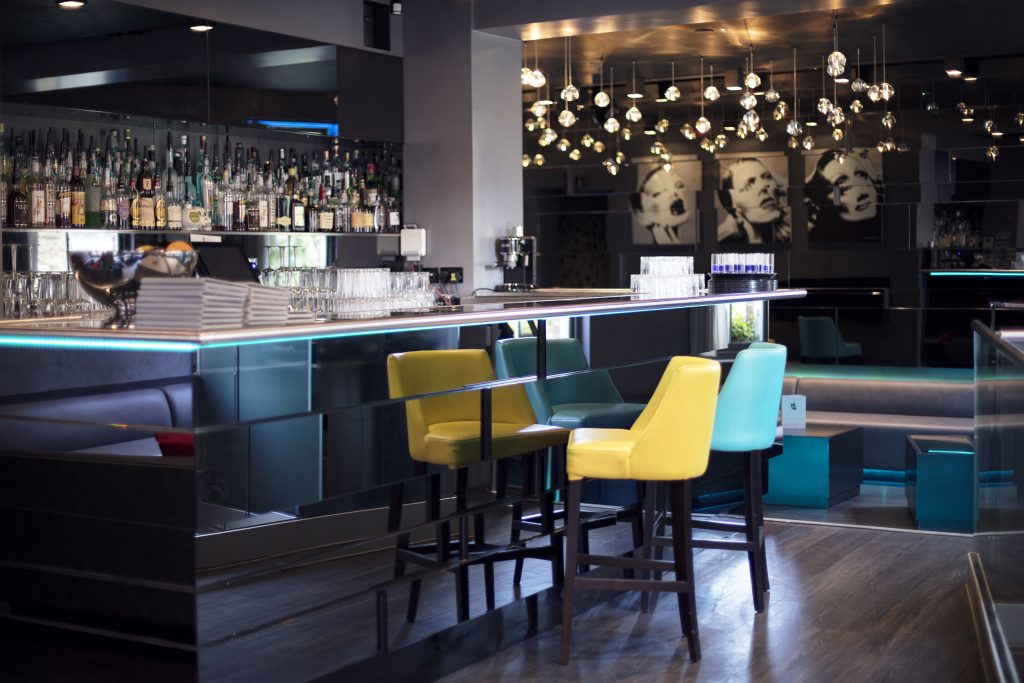 Between Leicester Square and Chinatown’s stretch of Asian eateries, the reflective cocktail bar The Light Lounge occupies its own glamorous stratosphere. With its twinkly chandeliers, elegant grey banquettes and perfumed lilies scenting the air, it’s an upscale escape from the chaotic streets outside.

This sanctuary is from the same team as downstairs Ku Bar, and if cocktails are your poison, quality mixology is what these guys do best. With a rotating, refined menu of seasonal house specials, they harmonise the finest of spring/summer and autumn/winter spices, spirits and juices into the most quaffable of creations, polished off with an elegant signature flourish.

The best deals are during happy hour, which runs until 7pm daily and all-day Sunday and Monday. For the non-cocktail minded The Light Lounge have a superb range of prestige spirits and Veuve Clicquot champagnes.

They’ve now also extended their opening hours until 3am throughout December. 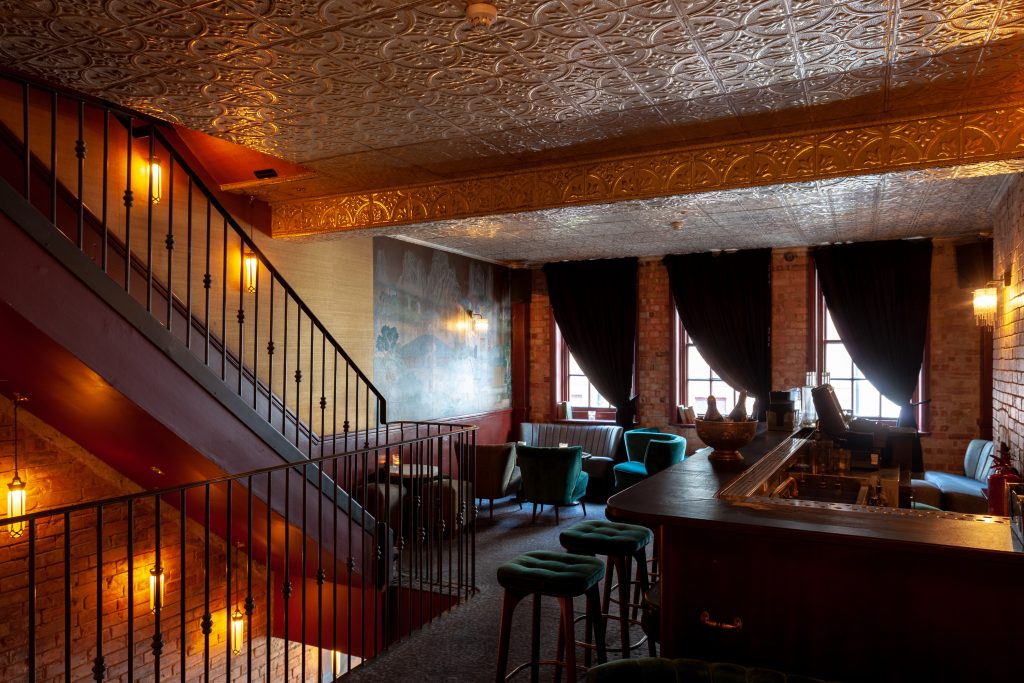 The brainchild of Les Trois Garçons founders, Romée de Goriainoff, Pierre-Charles Cros and Olivier Bon – in partnership with ex-Hendrick’s Gin ambassador, Xavier Padovani – ECC was established in 2010 and has been serving up exquisitely-formulated cocktails to discerning sippers ever since.

Their menu is pure alcohol alchemy, with wittily-named, beautifully-harmonised house cocktails that are a mixologist’s utopia. If you think you know your premium spirits, you might want to think again. ECC offer a selection of old-fashioned cocktails fashioned from rare and hard-to-source vintage spirits. They also present a great selection of prestige champagnes or, if you’re peckish, there’s cheese and charcuterie to nibble on. 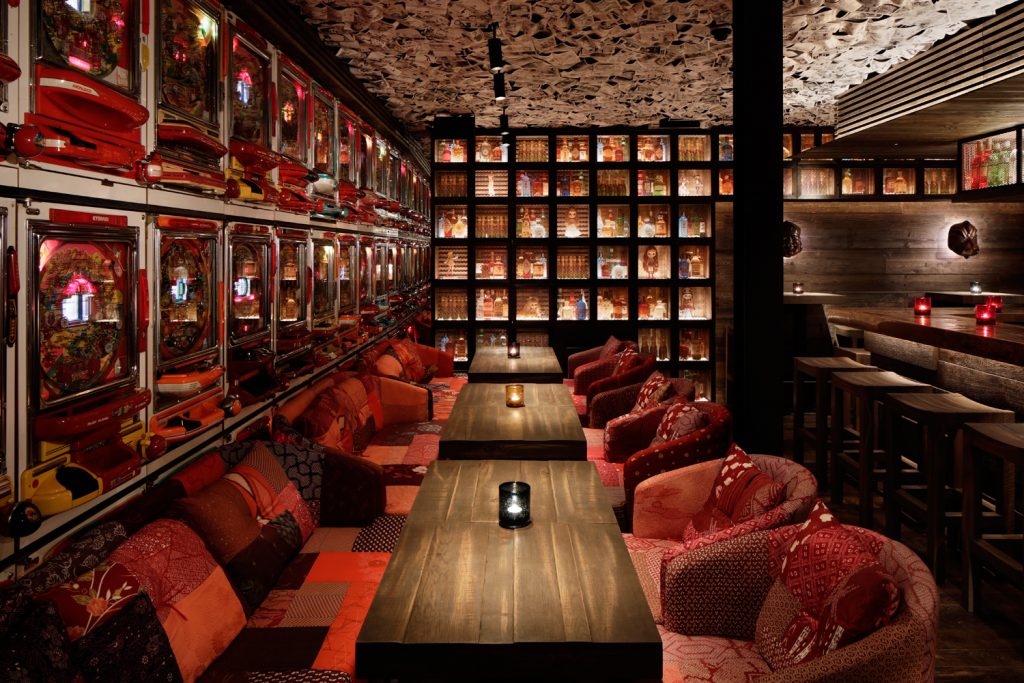 Fusing drool-worthy, American filthy foods with fine Asian flavours, ICHIBUNS is a burger bar like no other. With a cool Tokyo rock n’ roll attitude, this three-storey eatery is one of London’s premium Japanese super-diners.

And downstairs, ICHI BAR is one of the most happening places in Chinatown. A basement lounge where you can enjoy yōshoku (Japanese-style Western food) while sipping on their signature cocktails surrounded by wall-to-wall vintage Japanese memorabilia. Try their new Wasabi Mule on their new menu which is a mixture of vodka, Wasabi infused ginger syrup, fresh lime and cucumber.

Every Friday and Saturday the best of London’s (and international) DJs play til 1am.